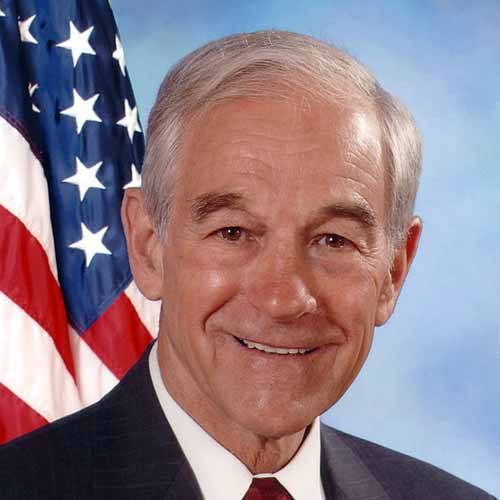 On three occasions, he sought the presidency of the United States: as the Libertarian Party nominee in 1988 and as a candidate in the Republican primaries of 2008 and 2012. Paul is a critic of the federal government's fiscal policies, especially the existence of the Federal Reserve and the tax policy, as well as the military–industrial complex, and the War on Drugs.

Paul has also been a vocal critic of mass surveillance policies such as the USA PATRIOT Act and the NSA surveillance programs. Paul was the first chairman of the conservative PAC Citizens for a Sound Economy and has been characterized as the "intellectual godfather" of the Tea Party movement.

Paul has been described as conservative and libertarian. According to University of Georgia political scientist Keith Poole, Paul had the most conservative voting record of any member of Congress from 1937 to 2002, and is the most conservative of the candidates that had sought the 2012 Republican nomination for president, on a scale primarily measuring positions on the role of government in managing the economy – not positions on social issues or foreign policy matters.

Other analyses, in which key votes on domestic social issues and foreign policy factor more heavily, have judged Paul much more moderate. The National Journal, for instance, rated Paul only the 145th most conservative member of the House of Representatives (out of 435) based on votes cast in 2010.

The foundation of Paul's political philosophy is the conviction that "the proper role for government in America is to provide national defense, a court system for civil disputes, a criminal justice system for acts of force and fraud, and little else." He has been nicknamed "Dr. No," reflecting both his medical degree and his insistence that he will "never vote for legislation unless the proposed measure is expressly authorized by the Constitution.

In 2013, Paul established the "Ron Paul Channel", an Internet broadcast. Its slogan is "Turn Off Your TV. Turn On the Truth." Speaking about the channel, Paul said, "I was at a debate one time a couple years ago, where I didn't think I got a fair shake.

In a two-hour debate, I had 89 seconds. I thought, maybe there's something wrong with the media. Maybe they're not covering us fairly. I'm just using it as a pun, but there’s a bit of truth to this. We don't get a fair shake. The people who believe in liberty and limited government don't expect it from the ordinary media."

Speaking about his youth appeal, he noted, "They don’t sit and watch TV and turn the programs on at seven o'clock to watch us like that – so I thought the technology was there. The country is ripe for the continuation of this revolution."

In the announcement of the ended relationship, Paul said, "But the message I have always tried to deliver over the years has always been the same, and that is spreading the message of liberty. Right now I am very much engaged in doing that through the internet. But, I believe we can do better.

Right now, the program has changed to the Ron Paul Liberty Report, and that is what we do, we report on liberty in context of what is going on in daily activity and what is going on in the news." Paul went on to say that it will be more locally controlled, unlike the previous Ron Paul Channel. Paul continued to say it will be produced out of Texas, instead of California.

Paul endorsed his son, Senator Rand Paul, in the Republican primary and campaigned for him in Iowa. After his son dropped out, Paul had said that Bernie Sanders may be the most pro-liberty candidate, because of his opposition to cronyism with Wall Street and wars.

Paul was disappointed in the Libertarian Party for nominating Gary Johnson for President of the United States and told independent voters that Jill Stein was a better candidate for those who "lean towards progressivism and liberalism".