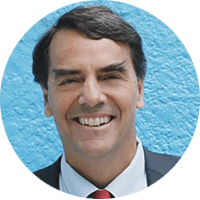 Tim Draper is the founding partner of Draper Associates and DFJ. Tim’s original suggestion to use viral marketing as a method for spreading a software application from customer to customer was instrumental to the successes of Hotmail, Skype, and others.

Tim has been recognized as a leading supporter of entrepreneurship with numerous awards and honors. He was listed as #46 of the most outstanding Harvard alumni, #7 on the Forbes Midas List, #1 of the Most Networked Venture Capitalists by Always On, and #98 in Worth Magazine’s 100 Most Powerful People in Finance. Tim also received the World Entrepreneurship Forum’s “Entrepreneur for the World” in 2015.

Tim received a BS from Stanford University with a major in electrical engineering and an MBA from the Harvard Business School.

He served on the California State Board of Education in 1998-1999, and currently leads an initiative to create six new states in California (Six Californias) to encourage competition and choice in government.

In 1994, he created a non-profit for young children to learn about business and entrepreneurship called BizWorld. In 2011, he created Draper University of Heroes, a residential and online school to help extraordinary young people meet their entrepreneurial goals.

On June 27, 2014, Draper purchased, for an undisclosed price, nearly 30,000 bitcoins which had been seized by the US Marshals service and auctioned to the public. The accumulation of bitcoins was estimated to be worth US$19 million at the time.

Bitcoin articles by or related to Tim Draper