Ardor is a public blockchain platform that will allow people to utilize the blockchain technology of Nxt through the use of child chains. A child chain, which is a ‘light’ blockchain that can be customized to a certain extent, is designed to allow easy self-deploy for your own blockchain.

NXT claims that users will "not need to worry" about security, as that part is now handled by the main chain (Ardor). This is the chief innovation of Ardor. The first child chain on the Ardor platform will be Ignis for which an ongoing crowdsale has been launched.

These are some of the key features of Ardor which are note worthy:

IGNIS and ARDR will be allocated to user accounts in the Ardor genesis block. Their distribution will be based on a one-time snapshot conducted over the Nxt blockchain, the “Ardor Genesis Snapshot”, to be performed at least two weeks after the end of the last round of the IGNIS crowdsale and shortly before the Ardor launch.

The total amount of IGNIS coins issued will be equal to half of the amount of NXT coins existing on the Nxt blockchain at the time of the Ardor Genesis Snapshot, plus 500 M (five hundred million).

Approximately half of the IGNIS coins will be reserved and distributed automatically to the NXT holders based on their account balances at the time of the Ardor Genesis Snapshot, at a ratio of 1 NXT : 0.5 IGNIS.

From the remaining 500 M IGNIS, 440 M will be offered to the general public in the IGNIS crowdsale (conducted using JLRDA IOU tokens, and 60 M will be kept by Jelurida. 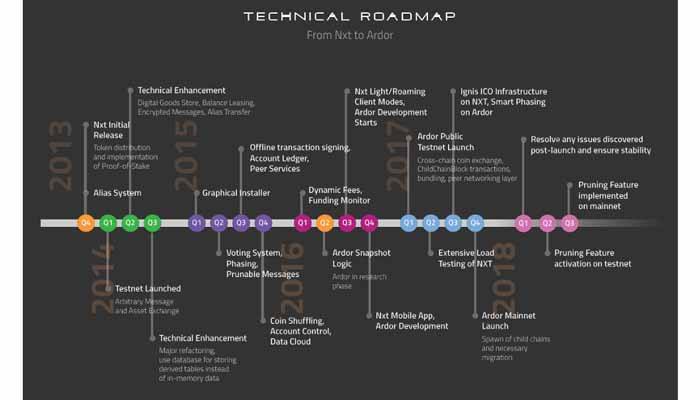 Getting Started With Ardor

The Ardor Blockchain-as-a-Service Platform was created by Jelurida using the proven features of the solid, reliable Nxt blockchain technology. Ardor extends Nxt for use in certain applications that require scalability and want to avoid “mining” required by some developing blockchains.

There are two parts to the Ardor Platform—the Ardor main chain and child chains that are the distinct blockchains created for business with use-specific features and applications.

The features on the Ardor main blockchain are limited to improve performance and to reduce the blockchain bloat that occurs with the accumulated storage of information.

Ardor is 100% Proof-of-Stake so no additional processing will be needed for mining as all tokens have already been created.

Fast - Each block containing all child chain transactions will be processed in around 60 seconds or less.

Scalable - Child chain transaction data will be pruned to reduce the size of the blockchain.

Secure - Ardor was by Jelurida, the company of the core development team of Nxt, a blockchain with years of proven security and stability.

IGNIS is the first childchain on Ardor and will be available on the official launch of Ardor.

IGNIS will distributed automatically to NXT accounts at the time of the Ardor Genesis Snapshot at 1 NXT = 0.5 IGNIS ratio.

IGNIS and ARDR coins will be distributed to qualifying user accounts in the Ardor Genesis Block. There will be a one-time snapshot of the Nxt blockchain (the "Ardor Genesis Snapshot".) The Snapshot is planned for Nxt block height 1630000 and expected to occur around Dec 25th, 2017.

The snapshot will determine NXT account balances and half of all IGNIS coins will be distributed automatically at 1 NXT = 0.5 IGNIS ratio.

The Ardor production software release will be done shortly after the snapshot, with the blockchain scheduled to start exactly on Jan 1, 2018, 00:00:00 UTC.

The other half of the IGNIS coin supply was partially used by Jelurida to conduct a successful IGNIS Token Sale over a period of three months from Aug 05, 2017- Nov 04, 2017. The ICO generated 167 million NXT which were partially converted to fiat, Bitcoin, and Ardor.

The total proceeds were over $15,00, 000. These funds will be used for the further development, maintenance, advancement and world-wide promotion of the Nxt and Ardor blockchain platforms and protecting the intellectual property of the code base.

The token sale was conducted on the Nxt blockchain platform, using a "controllable currency" called JLRDA. For 1 JLRDA token the participants in the ICO will receive 1 IGNIS coin at the time of the Ardor Genesis Snapshot. See the IGNIS Token Sale Whitepaper for a detailed overview of the IGNIS crowdsale.

Nxt is an advanced open source application platform which expands the things you can do with a blockchain.

Ardor builds on the proven technology of NXT and adds new features like pruning and childchain creation.

How To Get A Ardor Wallet?

Ardor is a next-gen blockchain platform based on the successful experience of Nxt. The Ardor blockchain has unlimited scalability and supports safe smart contracts. One of key features of Ardor is a so-called Child-Chain.

This is the element of the blockchain allowing to build decentralized applications without down-time, censorship or any unwanted interference. Child Chains provide a low-cost and stable ecosystem and connect to other chains thus making the main Ardor blockchain. The system can be used for any purposes as well as personal and public ones.

How to exchange Ardor to BTC

Now let’s see how you can exchange Ardor to BTC on Changelly. The principle is the same as with other cryptos.

1. First, you need to go to the homepage and select the amount of ARDR (or other crypto) you wanna exchange to BTC. You’ll see the estimated rate on the right. Notice that it may differ from the final rate.

2. Carefully check the amount and other details.

3. In the field ‘BTC address’ paste the address of the BTC wallet you want to get your coins.

4. Check the details: the amount, the estimated rate and go next. 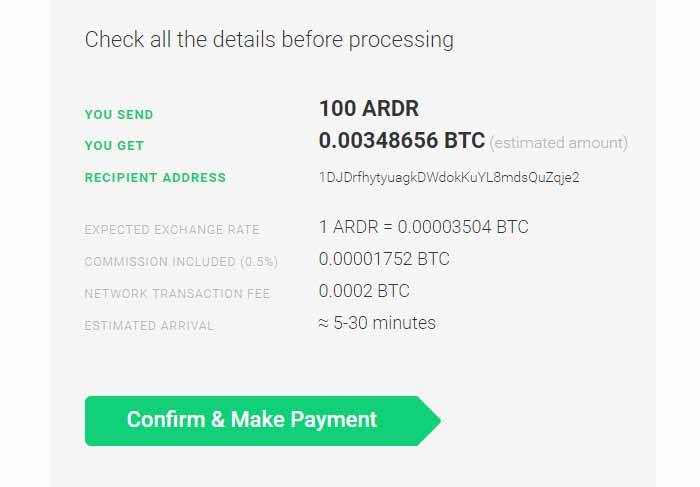 5. Now you need to send your ARDR to the given address. In one transaction. Note, if you send less than the amount intended, you’ll get less amount of BTC and vice versa. 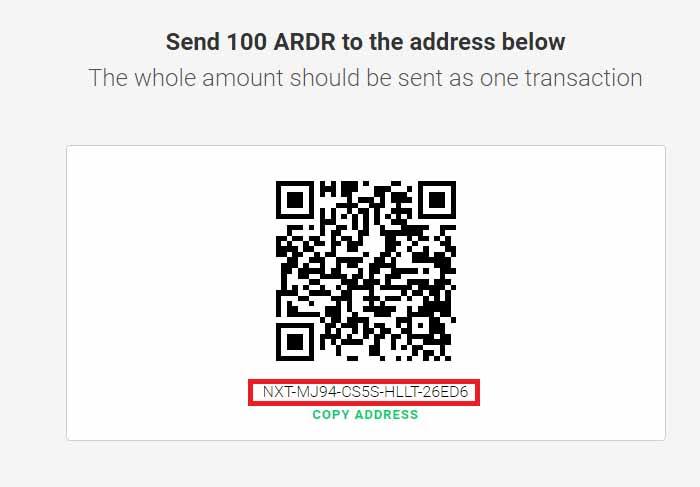 6. Go to Poloniex and type the amount of ARDR to withdraw. Specify the address given.

7. Wait until your payment is finished. In the history tab on Changelly, you may see the status of your transaction.

8. Done! You get a receipt with the final amount and other information including a transaction number and its hash. This is a proof that the transaction is finished. 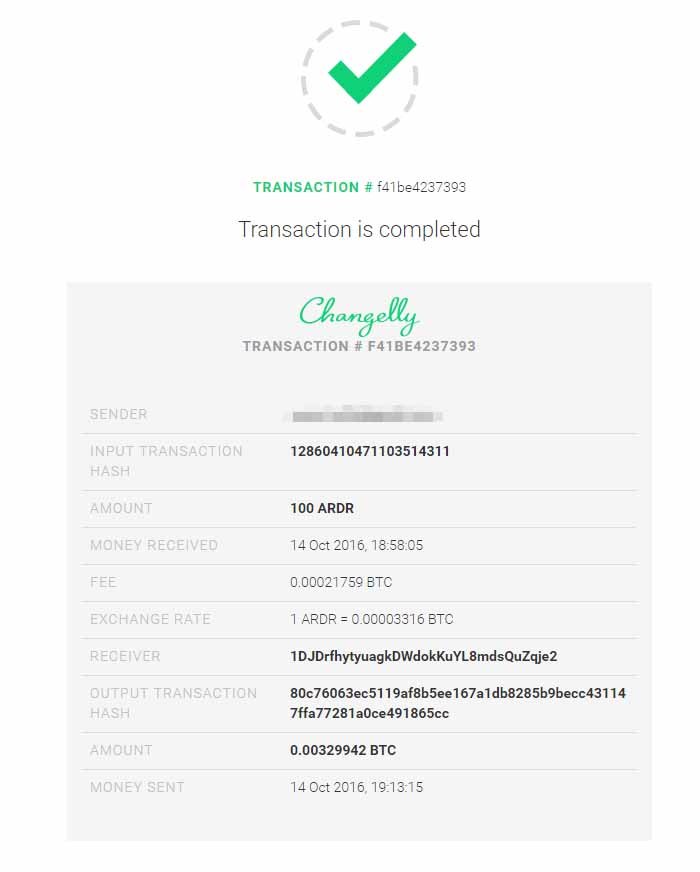 9. Now open your BTC wallet and make sure, you’ve received your Bitcoins.

That’s it. You don’t need additional messages to get your transaction finished.

How To Buy Ardor?

Ardor is the following step in the evolution of Nxt: a new parent/childchain architecture that will allow multiple, customisable, user-created blockchains to run in parallel with each other. The Ardor asset tokens have now been distributed to all NXT holders in proportion to their NXT account balances, at the end of a 3 month account snapshot process.

These tokens will be transferred to the main Ardor blockchain when Ardor goes live, in mid-2017. If you held NXT on a main blockchain account in the last 3 months you will aready have received some Ardor, but if you wish to buy some more Ardor there are a range of options.

This is the Ardor asset:

Accept no substitutes for this asset! It is the only official Ardor asset and will, when the Ardor blockchain goes live in 2017, be swapped for ‘real’ Ardor on the new blockchain. It is intended that the Ardor asset be traded freely up until then, thus ensuring widespread distribution for the new Ardor platform.

Be careful when trading, there are always people who like to take advantage of the excitement around a new system launch to be dishonest, so check carefully before you buy, especially if the offer is being made via a marketplace or a personal one-to-one deal.

This is the first place that Ardor will be available, and is accessible via the main Nxt client.

Once you have the NRS (Nxt Reference Software) client up and running, you will be immediately able to connect to other peers to create an account and make transactions while the blockchain downloads in the background. Please pay careful attention to the account creation process, particularly in choosing (and securely storing) a STRONG passphrase.

Using this interface you can safely trade ARDR<>NXT on the Nxt blockchain itself. The interface is simple and intutive to use. Please note that as this is a blockchain based system, updates occur at one minute intervals with each new block.

For the people who wish to buy into Ardor and Nxt without having to set up their own client and account, MyNxt will also immediately allow Ardor trading: https://wallet.mynxt.info/

MyNxt has an light wallet that allows you (via a plug-in) to access the Nxt Asset Exchange as shown above. All trading is in Nxt. Note that accounts created via MyNxt can be easily exported to the main blockchain, so are not lost even if MyNxt itself goes offline

If you wish to buy directly into Ardor with Bitcoin (or fiat, or other crypto-currencies), you will have to go to a third party service, such as an exchange or ‘shift’ platform.

Major cryptocurrency exchanges are opening Ardor markets now and over the next few days, right now the list of exchanges that offer Ardor trading are: