Bitcoin and Ethereum successfully introduced both the “Peer-to-Peer Electronic Cash System” and “Smart Contract” to blockchains. The industry is evolving rapidly, with emerging applications and requirements, however for current blockchain technologies, we find there are three core challenges: establishing a measurement of value for applications on the blockchain, the ability to self-evolve & incorporate future advancements into the underlying blockchain itself, and a healthy long term ecosystem for all participants within the blockchain ecosystem.

Nebulas aims to address these challenges. This white paper explains the technical design ideologies and principles of the Nebulas framework. Our framework includes:

Currently the Blockchain technology and community have grown into a large scale ecosystem. However, people’s perception of Blockchain world is still relatively flat; there is no reasonable way to evaluate the value of an entity (such as user address) on the blockchain yet. Therefore, we try to come up with a universal measure of value. By exploring and utilizing activities on chain, we create Nebulas Rank through which the value of each entity (user address) is able to be quantified. Nebulas Rank is designed to:

Based on the goals above, we define the measure of value of Nebulas Rank from three dimensions:

Propagation, the scope and depth of asset liquidity, is the second dimension that Nebulas Rank measures. In social network, the propagation property, i.e. speed, scope and depth of information transmission, is a key index indicating network quality and user growth. We see the same pattern in the Blockchain world. Powerful propagation means wider and deeper asset liquidity, which improves the quality and scale of assets in the Blockchain world.

Interoperability is the third dimension that Nebulas Rank measures. During the early stage of Internet, there were just simple websites and isolated information. Now information on different platforms can be forwarded on the network, and isolated data silos are gradually being broken. This tendency could be understood as a process of recognizing information from higher dimensional perspective. We believe that Blockchain world also follows a similar pattern, whose development will be faster. There will be more information of users’ assets, smart contracts and DApp. And also, there will be more frequent interactions among them. Therefore, better interoperability will become more important.

We choose transaction records on chain as source data for Nebulas Rank. That is because the “trajectory” in Blockchain world is more clear and trustworthy than that in the real world. Transaction data such as transfers and callings of “smart contracts” are all recorded on chain. But it is not trivial 9 to design rank algorithm for Blockchain transaction data, since the transactions in Blockchain world are naturally anonymous and bear larger data scale than that in the real world. Three major properties for Nebulas Rank are described below:

Next we design the basic framework of Nebulas Rank. First, transaction records are represented in the form of graph. In the transaction graph (entity graph), every node is mapped to one entity, and each edge represents the transfer between two entities. Transaction graph embodies the fact that money transfer among users leads to assets flowing, which helps to represent the concepts of liquidity and propagation defined before. Meanwhile, the form of graph can clearly display the interoperability among contracts. With the derived transaction graph, we rank nodes by their network centrality. In the scenario of Nebulas Rank, LeaderRank is a more reasonable measurement and outperforms PageRank of Google and NCDAwareRank of NEM.

Getting Started With Nebulas

Nebulas legitimate site demonstrates a worldwide group of 14 center individuals, including Hitters Xu, originator and CEO of Nebulas (who additionally happens to be the author of AntShares, now known as NEO). Xu is viewed as a pioneer in the blockchain business, establishing BitsClub (the principal Blockchain/Bitcoin people group in China) in 2013 and in addition mainstream ICO stage ICO 365. He additionally established the crypto supports firm, FBG capital. Over that, he coordinated an Alibaba budgetary arm (Ant Financial's Blockchain Platform) and supported Google's Search and Anti-Fraud group.

Prime supporters Robin Zhong and Aero Wang convey a long time of blockchain ability to Nebulas too. Features in Zhong's resume incorporate him being a unique planner of Ant Financial's Blockchain Platform and the author of Chinas first blockchain bolster stage, Tongxinclub.

The three counselors (Edith Yeung, Chris McCann, and Evan Cheng) to the venture are likewise persuasive individuals from the business/blockchain groups. Yeung is a devoted tech financial specialist, an accomplice at 500 Startups, and has been highlighted in Inc's Magazine article "The Silicon Valley Investors You Need to Know in 2016".

McCann built up the group program at Greylock Partners (financial specialists in Coinbase, FB, Airbnb, Linkedin, and so forth). Also, McCann was an early guide for the Thiel Fellowship at Stanford University and was a prime supporter of Startup Digest.

To wrap things up, Cheng is a building chief at Facebook with an earlier 10-year advancement profession at Apple. He's got the ACM Software System Award for his commitments to software engineering. 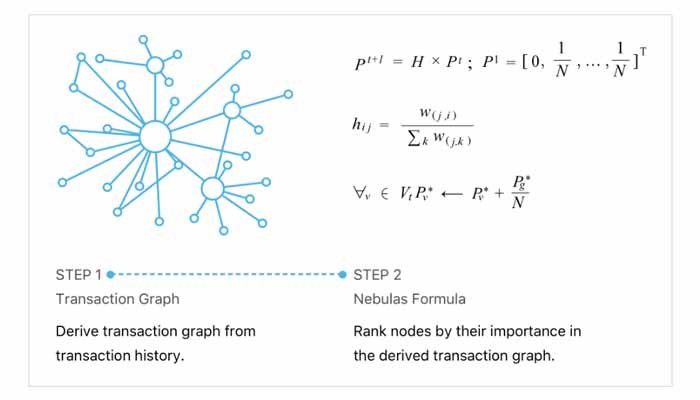 Nebulas Rank (NR) - Nebulas Rank (NR) is our core ranking algorithm which has been open sourced. The algorithm is based on liquidity, propagation of users' assets, and the interactivity between users. NR is used to rank addresses, smart contracts, decentralized applications (Dapps) and other entities on the blockchain. 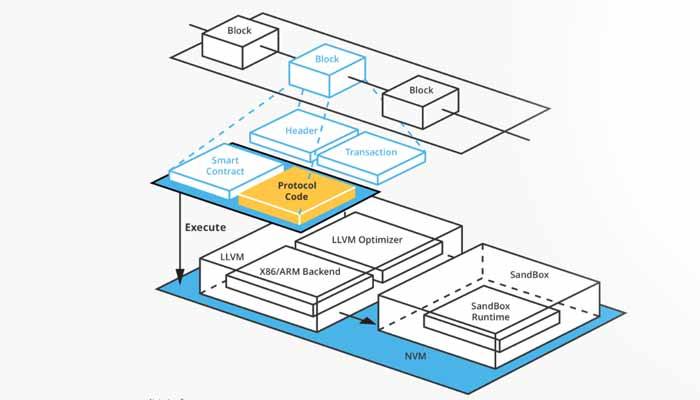 Nebulas Force (NF) - Nebulas Force (NF) provides the Nebulas blockchain & its distributed applications built on top, the capability to self evolve. With NF developers are able to make changes, incorporate new technologies, and fix bugs without needing to hard fork. 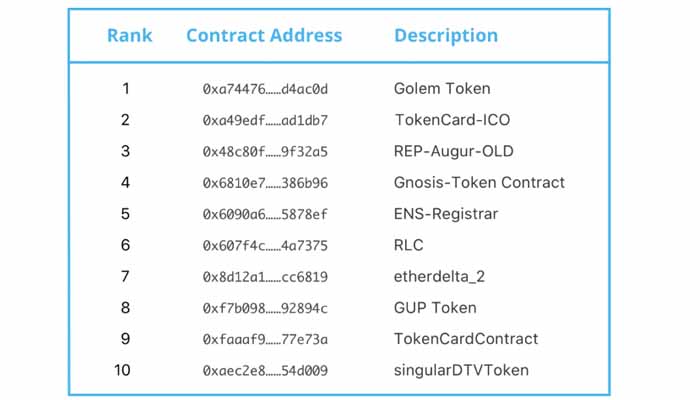 Nebulas Incentive (NI) - Incentives are the driving force of blockchain evolution. The Nebulas Incentive includes Developer Incentive Protocol (DIP) and Proof of Devotion (PoD). DIP provides a feedback loop for developers to create high-quality distributed applications. With PoD, users who rank well (based on NR) will be rewarded in our Nebulas Token (NAS) by bookkeeping.*

How To Get A Nebulas Wallet?

Note: Nebulas doesn’t use a dedicated website for the web wallet because of security. Its always safer to do these types of things offline.

Go to the Web-Wallet directory

When you Click index.html (this will open up your browser) 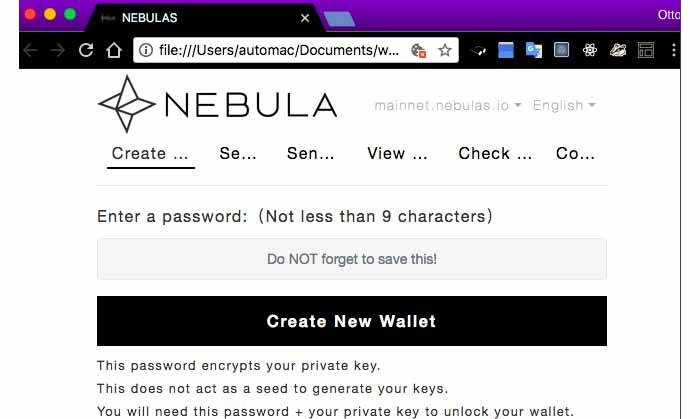 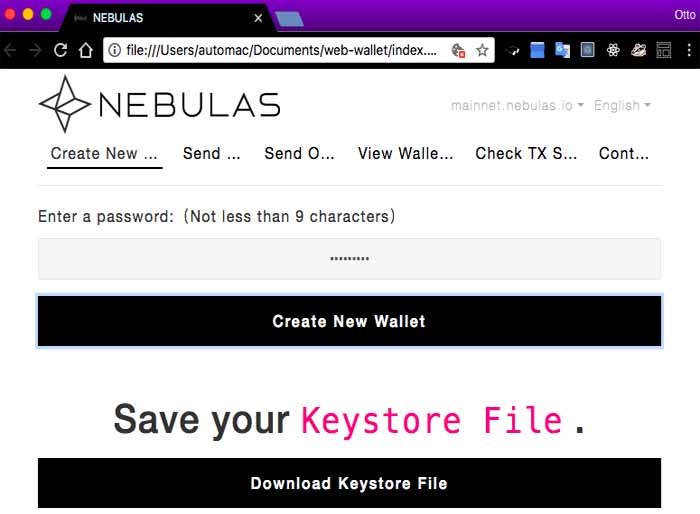 NOTE: The KeyFile allows you to create transactions offline.

Sending NAS from your Wallet

How To Buy Nebulas?

Go to the Coinbase Signup Page. Here we’re going to buy some Bitcoin or Ethereum with which to trade.

You can actually use USD Tether, but thats a whole other rabbit hole. Let’s stick to the basics. 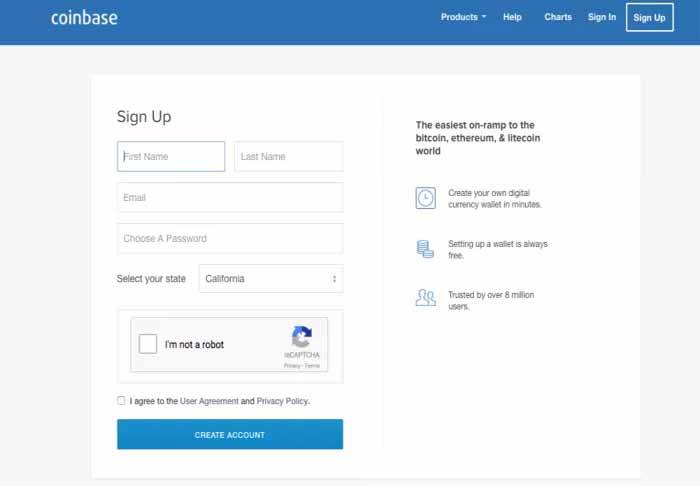 This is a marketplace. This is where BTC & ETH can be traded for Nebulas. Make an account on the Gate signup page. Make sure to write down your passwords and use the Authenticator app for 2-Factor authentication.

Gate has a really quick & easy registration process, so there shouldn’t be much trouble here. If you don’t like Gate, there are other places where you can buy Nebulas. 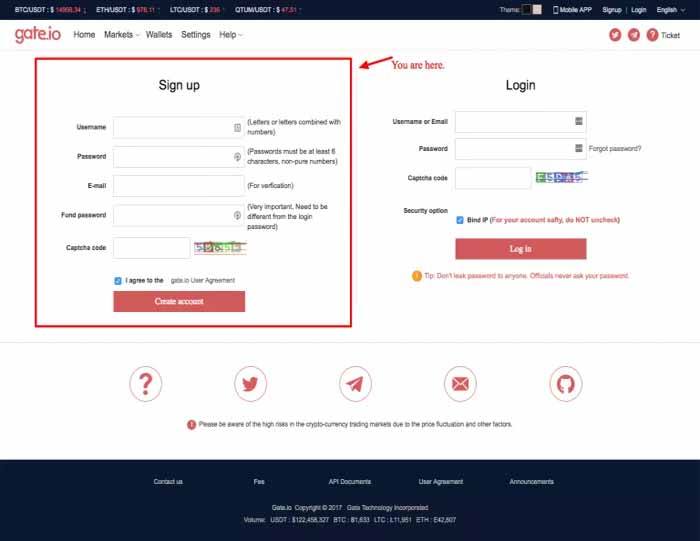 Use credit/debit or a bank transfer to purchase some of either of these coins. Note, there are 5-7 day wait times for bank transfers. Credit/Debit are instant. 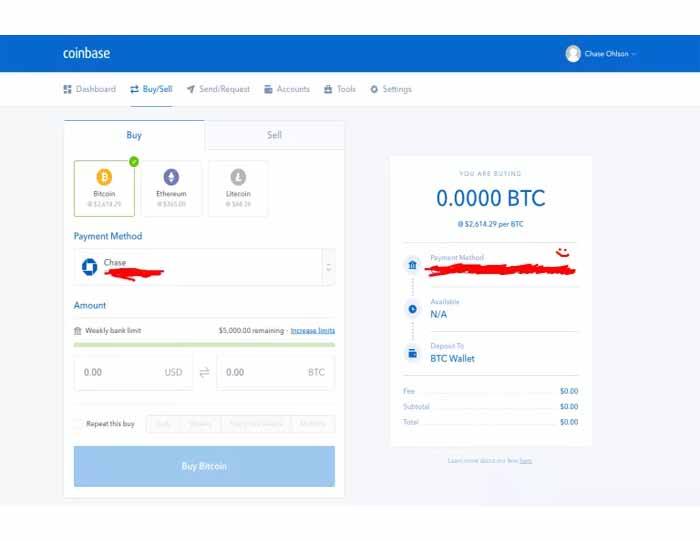 This part is the first technically challenging thing you will do. Click on the screenshots below for a visual aid. Essentially, we’re going to send coins from Coinbase to Gate.io. In order to do this, you need to generate a BTC or ETH wallet address on Gate.io. This demo uses Ethereum, you can do this same process with Bitcoin. 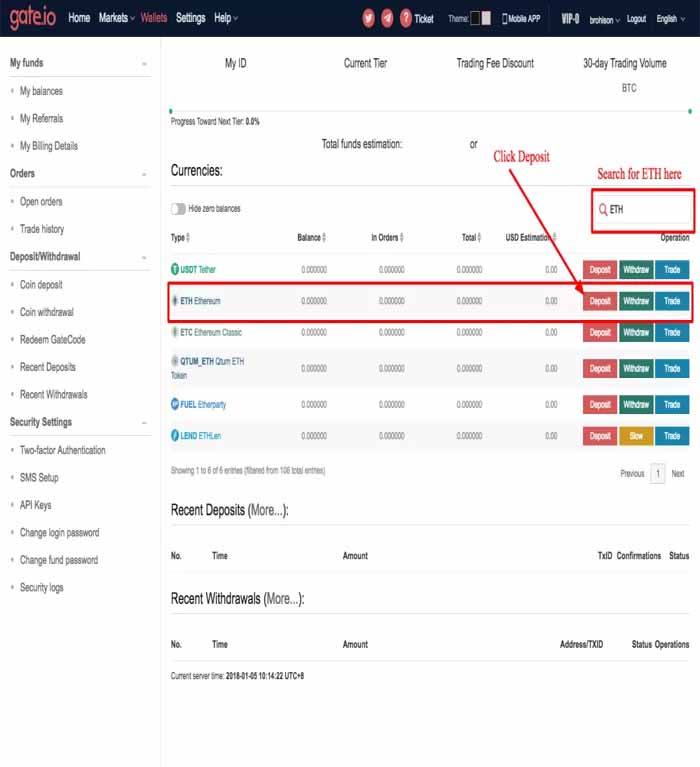 Go to the “Wallets” page found in the main header. Search for “ETH” in the search bar. When you find Ethereum, click “Deposit” 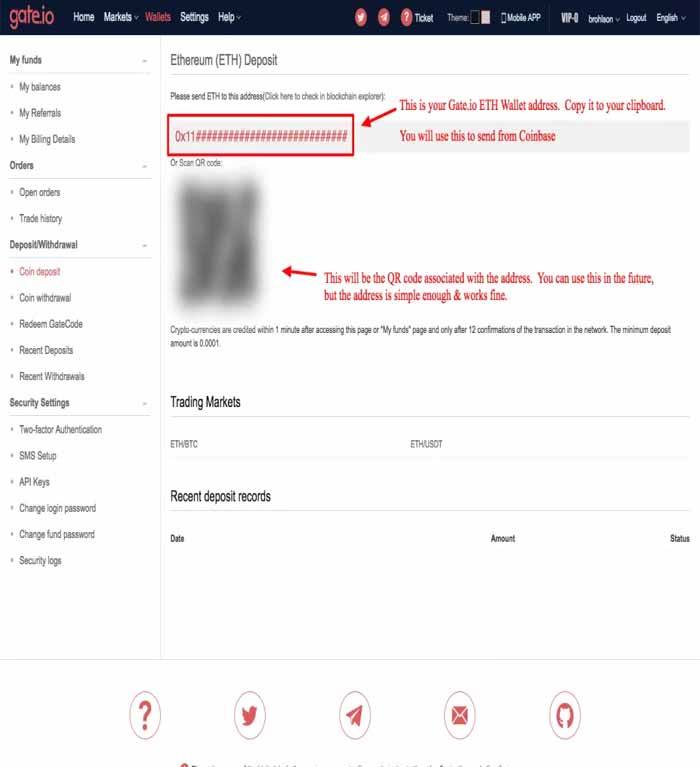 This page contains your Gate.io ETH wallet address. Copy down the string of letters and numbers. 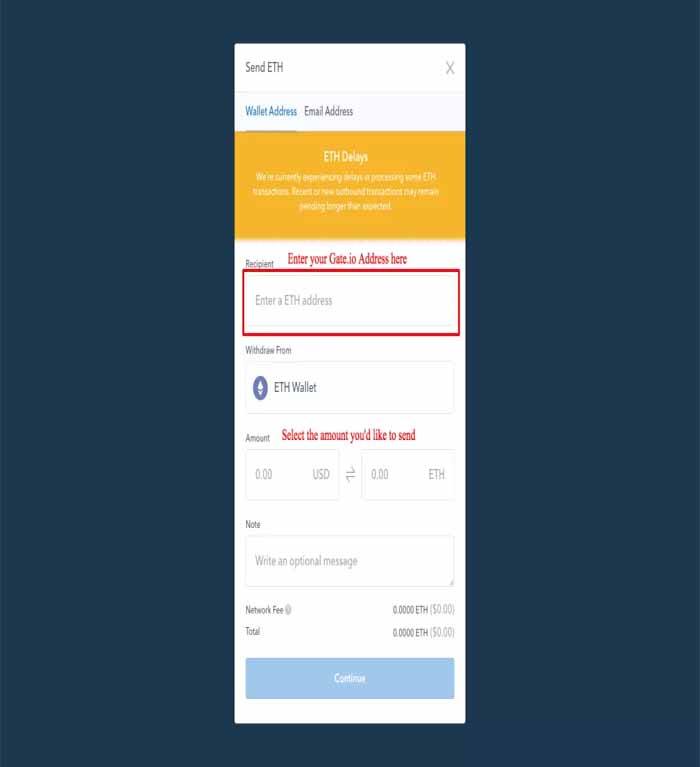 On Coinbase, select Accounts > ETH Wallet > Send. Paste you Gate.io address code into the “Recipient” input on Coinbase. Then select how much you would like to send & you’re all gravy. 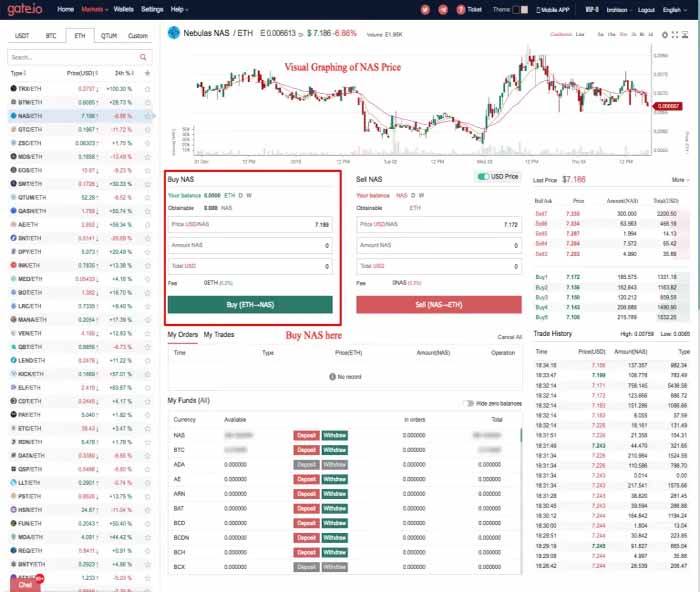 This is a pretty complicated page to look at if you’ve never used a marketplace. Here are some general pointers/tips:

How To Buy Nebulas? 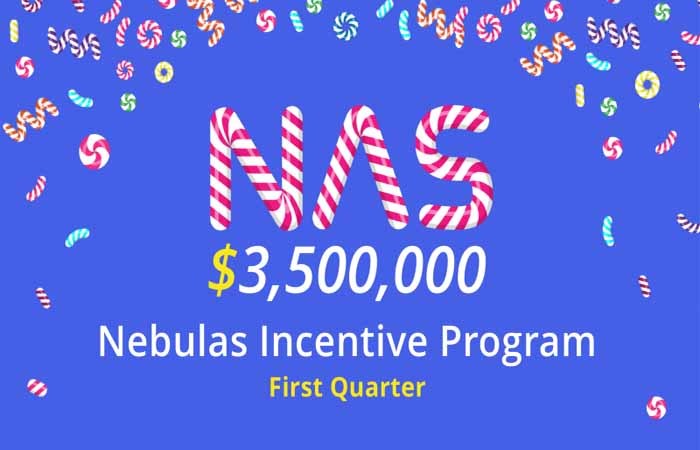 Nebulas officially announced the start of the Nebulas Incentive Program on April 27, 2018. From 00:00 on May 7th, 2018 to 00:00 on July 2nd, 2018, Beijing time, all developers and their referrers who successfully submit DApps on the Nebulas mainnet can receive NAS coin rewards.