Prior to writing about Tether, I made an effort to contact one of the individuals behind the project.

I will start that I believe this particular individual behind Tether to be a genuine guy on first impression. I had a very civil conversation with him privately.

I decided against publishing this conversation in my past articles, even though it would have made an exceptional addition because in my opinion it shows a serious problem. His comments further drove me to write my Tether posts, and he has continued to be civil and professional with me despite my posts which are critical of a project he is involved in. Hats off to you.

This is what he informed me of in April of this year.

1. Tether has been audited.

2. The audits are completed.

3. He does not know the status of the audit (pass/fail), only that they have been completed.

Of course, it’s possible that what he said is not true, but for the arguments of this post, I am going to take his word for it that it is true.

I’m making this post because today I discovered another employee of Bitfinex known as “bfx_drew” on Reddit, publicly admitted that the prior audit reports exist right now. 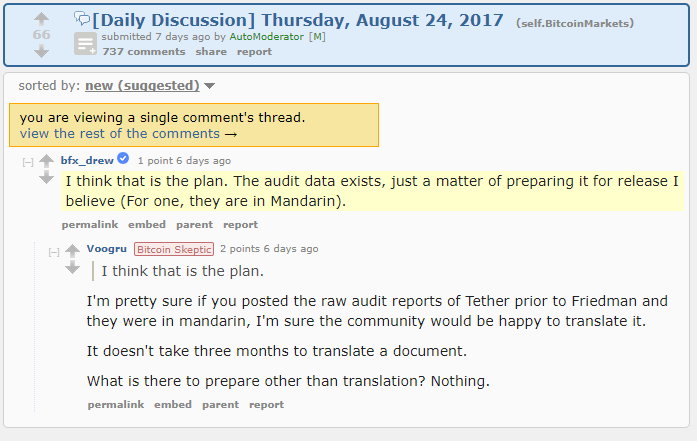 These audit reports have been completed for at least 5 months, based on the discussion I had with the Tether individual I spoke with back in April, I don’t think it takes that long to translate and prepare a completed audit for release.

The whole reason why they can’t publish the audit is because oh well it’s ‘underway’ by Friedman LLP. I’m not talking about those audits. I’m talking about the already completed audits.

If Bitfinex/Tether are unwilling to provide already completed audits, what makes you think they will provide the future Friedman LLP audits? Will they always be ‘right around the corner’? How long are people going to accept this charade?

You would only do this if you have something to hide.

It is easy for Tether to pass an audit

The Tether audit isn’t even worth that much realistically, because as mentioned in the previous posts the money that is in their account does not actually back circulating Tethers legally speaking.

Tether likely explains a Tether as a sort of car wash token to their auditors, the auditor checks the terms, and takes that into account in determining whether Tether is solvent. This means that Tether can pass an audit with a less than 1:1 ratio.

I don’t think there’s an auditor on this planet that will count car wash tokens as liabilities to a car wash company, likewise, they would not consider Tethers liability to Tether Limited.

The Bitfinex and Tether lawyer Stuart Hoegner is also well versed and educated in gaming laws, and making Tethers tantamount to car wash tokens or game tokens is a very important strategic move.

This means that passing an audit would be even easier than usual, what other liabilities could Tether have? Employees? There really aren’t any. Offices? They talk about their offices on their website, but they of course don’t have an address. You can’t walk down to the Tether office and provide your Tethers and get US Dollars.

So, passing an audit should be a cakewalk.

Which makes this even more puzzling to why they are not being forthcoming with the good news of these Tether audits which are completed allegedly. 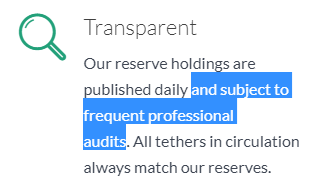 Tethers website has been scrubbed of the people behind Tether

Originally, Tether had an “about-us” and “team” pages (https://tether.to/about-us). Luckily we have an archive of it. This is the last version of the page, which was removed and never restored. 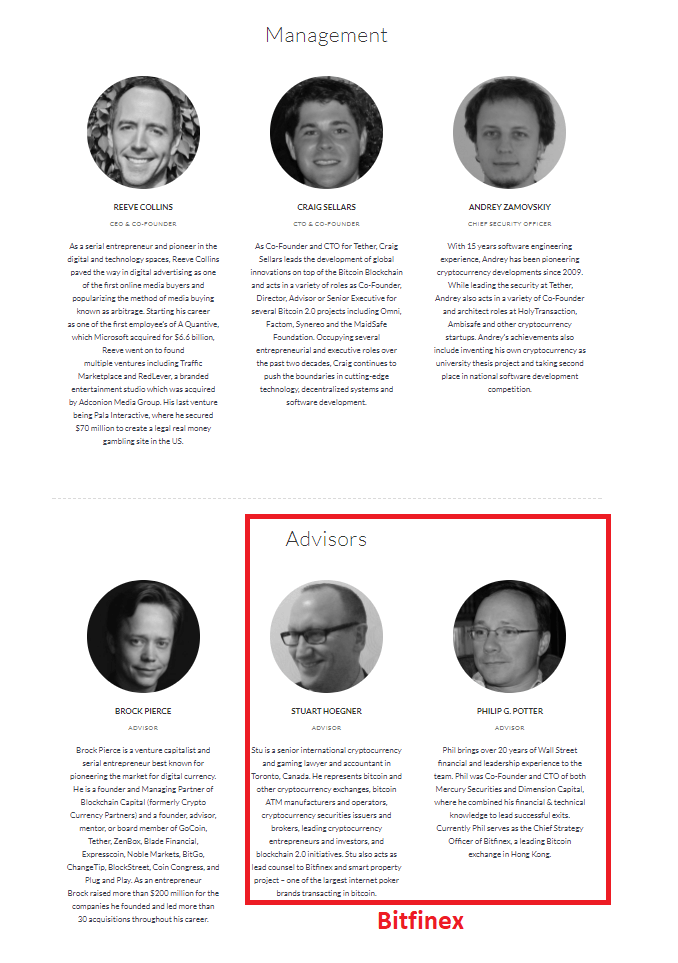 This is the first version of the Tether Team page. 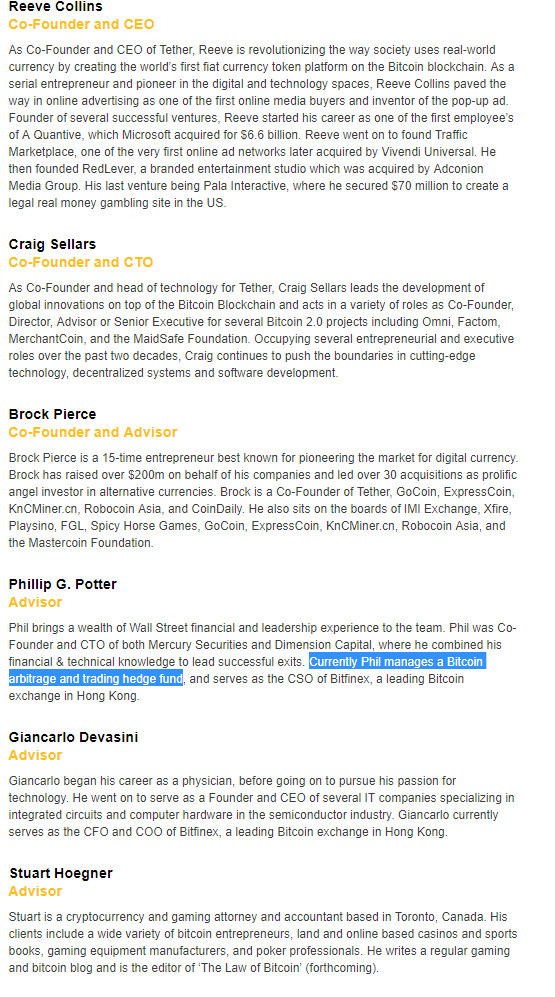 No possible conflict of interest there!

Eventually, someone pointed it out on Reddit in January 2015. 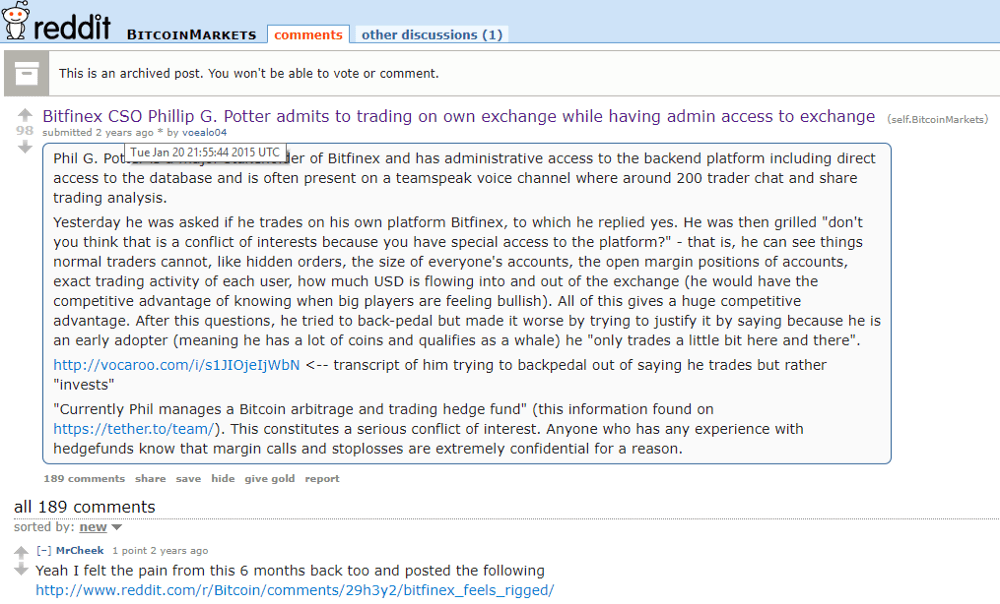 It was scrubbed shortly after. 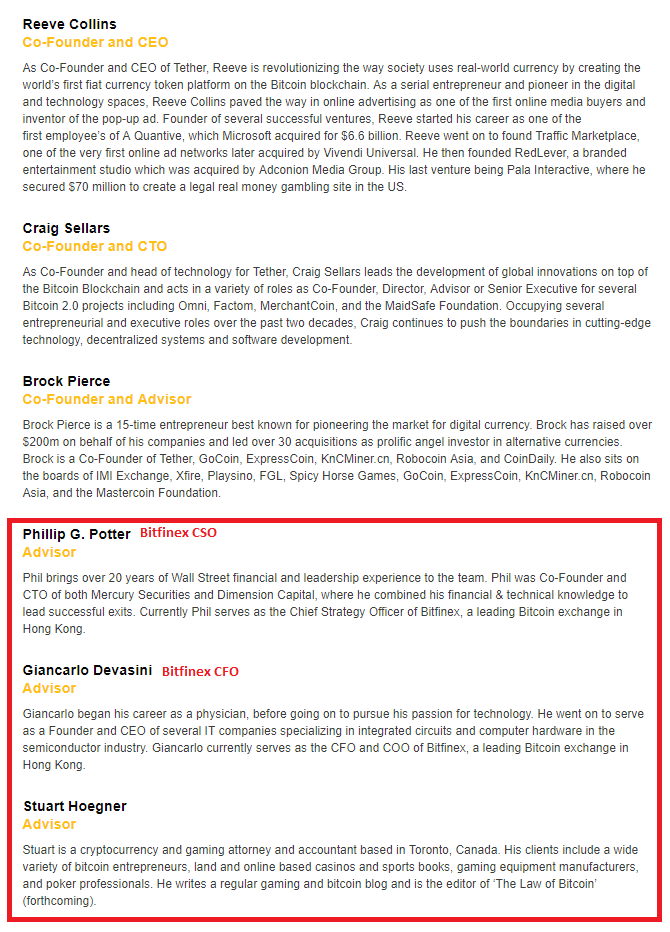 I spoke with 1 of the 6 individuals involved with Tether from these screenshots. I will not publicly disclose his name, and I am willing to provide proof to someone respectable so that my claim can be verified as long as they agree to keep his name confidential, perhaps with some sort of collateral with a trusted 3rd party intermediary.

I do this because based on my gut, I don’t think he’s the one engaging in fishy business and I don’t want to ruin his reputation for something that very well may not be his fault.

I have been lied to on several occasions by Bitfinex employees and supporters, I was constantly informed that “Bitfinex is not Tether, STOP FUDDING”. The evidence to the contrary is significant.

When I went digging (and boy did I have to listen to a LOT of stuff), I discovered that Bitfinex is a majority shareholder in Tether.

Phil Potter admitted this after the Bitfinex Hack, and a desire to pay the BFX Tokens off with non-redeemable Tethers. I have the audio from Phil Potters own mouth as my proof.

History is repeating itself as we speak

Of course they will say that I’m making this all up. It’s all “FUD” as Phil Potter will say. In fact, this is the only response to my posts. “FUD” no actual substance proving anything false. Wouldn’t it make sense to dismiss my claims right now with some actual evidence from a professional auditor that’s available right now?

Why would you delay releasing this FUD Destroyer 9000? That’s like folding in a game of Poker with a Royal Flush, against opponents who got dealt Pokémon cards. You can’t lose!

It was also all just “FUD” about Trendon Shavers Ponzi Scam.

There were people warning about the Trendon Shavers Ponzi Scheme. It was too good to be true.

They too were accused of “FUD” by none other than the Founder of Bitfinex, Raphael. He appropriately scrubbed his post after the fact, but unfortunately for him, someone quoted him.

Prior to him completely scrubbing his post… (which is available in the archive link above!), he edited and apologized then he said this.

This has been a great lesson for me, trust me. I had lost coins on this, I have not profited from this scheme nor do I plan to scam anybody with new scheme.

Well, I guess there was a change of plans.

It’s not true once we attempt to scrub it off the internet!

Are you noticing a pattern of content being scrubbed after the fact?

The internet does not forget. You can try and scrub evidence and content, but we’re going to find it, and bring it back to light.

I will say it again. You are being conned.