Anxiety Of Chinese Miners On UASF

Week earlier, there’s a lot of speculations and debates about the block size which being brought to the table. There are delays on the Segwit or Segregated witness that has been proposed several months ago to support miners in 95% which took already a quarter.

The pseudonym “shaolinfry” has been raising new process to activate without the approval of the miner. The process though is a bit complicated and debatable on Bitcoin community.

Shaolinfry pseudonym previous week appear to reveal the so called “going in to user-activated activation of soft-fork” on mailing list of BTC developers. The contributor of this concept believes that there are a lot of issues with Segwit in that can be profound with majority hashpower selections.

Both technical and political are the issues being tossed up by the author on miner activation by putting the choices on miner’s hand. The supermajority hash a problem on power signaling that plays unpleasant role to miner’s attention and that becomes unwittingly political according to him.

He added that user-activated soft fork or UASF is the solution which can be thought as emergent consensus or flag day activation.

He also explained that the “flag day activation” is the definite time in the future where nodes begun to have enforcement. The process should have a longer lead moment compare to a hash power triggered during activation, in that case these gives a lot of advantages and good options that has been offered.

The permission is very given. Miners do not tend to create new set of blocks and even the old version miners needs nothing to upgrade what has been with the soft fork called IsSuperMajority examples are BIP66, BIP34, BIP65-CLTV which is a must for miners to upgrade. 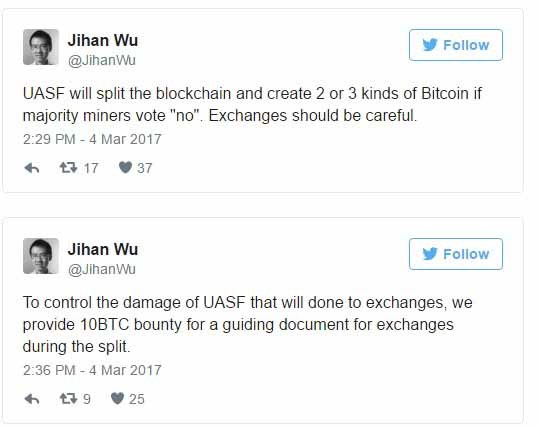 Bitmain - a BTC company founder Jihan Wu has been raising the issues about UASF plan to be push on the community. Wu added that theres a proposal to push through without the support of hashrate and determine to split Bitcoin like what has been happening with Ethereum blockchain last summer.

The core is advertising UASF or user-activated soft fork. If anything is successful without the support of the majority of hashrate, there will be a huge chance that Bitcoin blockchain will be on split according to Wu. Recently the core actually divided the community and now they are determine for the plan of splitting again using UASF.

There are lots of ideas also from Chinese miners on their own about discussing the topic. Synthetic Fork - which distance and lossens the ruling of concensus yet it will not allow for claims and avoid splitting of chain. The process is not to allow the current block size became 0mb and catinate it with a new extra block with the size of 2mb.

This will only be visible to newly upgraded nodes and on the otherhand, the old nodes will be seeing 0mb. So the claim was no debt technical at all.

To avoid blockchain split, the lion's share hashrate (supporting this proposition) will mine some unfilled squares to vagrant the pieces mined by minority hashrate who did not redesign. Along these lines, there will be no "additional" blockchain and no second bitcoin. After a dominant part of hubs are overhauled, a hardfork begins moving up to a more prominent piece measure.

Regardless of whether clients and diggers will continue with arrangements, for example, these is flawed. Be that as it may, the subjects are being faced off regarding intensely in the bitcoin groups and appear to make around pressure at the end of the day. It's protected to state that for the minute in Bitcoin-arrive there are completely unique dreams on the best way to continue forward with scaling.