Digital Geneva Convention has been raised for the government by one of the world leader in digital technology Microsoft. This is in response to government sponsored hackings, high number of malicious cyber attacks and digital warfare.

Due to some arrest of Bitcoin traders and miners in Venezuela, Bitcoin community member were anxious what will be the next thing to happen. Hence, the Digital Geneva Convention is a broadcast call for the members to guard their selves from bad actors as well as the development of the cryptocurrency freely.

The DGC will took place on February 14, 2017 at the RSA Conference, San Francisco, CA. That is after the proposal of Brad Smith, President, Microsoft on Digital Geneva Convention. He is one of the MVP in Microsoft's privacy and security.

“Needed: a Digital Geneva Convention to protect civilians on the internet, as the 1949 Geneva Conv. protects civilians in times of war.”

In 1949, the first Geneva Convention was introduce. This is to protect civilian's rights on ownership, privacy and security.

The principle of Geneva Conventions is to look after defenseless and unguarded individuals, for the period of armed clashes. According to Cornell University Law School :

“The Geneva Conventions is a body of Public International Law, also known as the Humanitarian Law of Armed Conflicts, whose purpose is to provide minimum protections, standards of humane treatment, and fundamental guarantees of respect to individuals who become victims of armed conflicts.” 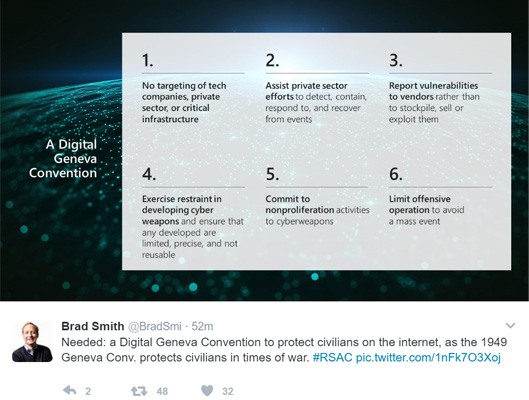 For the First Time, A new Digital Ambassador Has Been Nominated By DenMark

Preparing the Digital Geneva Convention and subsequently having the states endorse it will without doubt demand a substantial diplomatic attempt.

By the by, Denmark is on their way to appoint its first Digital Ambassador.

Anders Samuelsen , Danish Foreign Minister has affirmed that given that Microsoft , Apple,, Facebook and other technology enormous corporations have reached significance and authority of such degree that “they merit their own ambassador,” Politikn reported.

If the Denmark’s digital ambassador turn out to be a certainty, her/his duty will surely be to cheer technology corporations to amplify investments in Denmark, as well as supply to the expansion towards building a cashless society.

In addition, at the bottom of Smith’s raise for a Digital Geneva Convention strength be applicable accountability of the Digital Ambassador.

Bitcoin and its blockchain technology are decentralized and trustless networks.

All these features permit Bitcoin to be suppression resistant and flexible, proficient of overcoming marvelous confrontation, as established during its little existence.

On the other hand, aspirants of the Bitcoin community are being mistreated and in prison. Particularly, the government of Venezuela has been closing down important mining operations as well as arresting Bitcoin traders and Bitcoin miners.

Consequently, the raise for a Digital Geneva Convention is reliable with the want to make sure the shield of the cryptocurrency from mean cyber attacks and the Bitcoin community from tyrannical governments, thus allowing the currency to endeavor and burgeon in freedom.